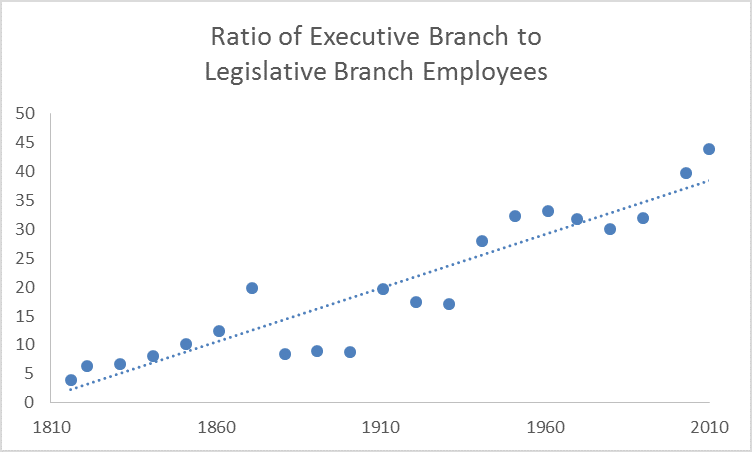 The rise in executive power is inexorable; you’ll see the same pattern in the states and in foreign countries. It reflects deep forces that are unresponsive to ideological swings. It shows that with the passage of time the executive’s influence on policy outcomes increasingly outstrips that of Congress.

What is the committed originalist to make of this pattern? I can see two responses. The formalist will say that it doesn’t bother him as long as the rules were obeyed. If they weren’t, then the entire edifice of the modern legal-bureaucratic state must be dismantled, whatever the cost. (I realize now that there are moderate originalists who don’t take such a position, but I am at a loss to understand the practical implications of their originalism.)

A non-formalist originalist might argue that, regardless of whether the rules were obeyed, the legal-bureaucratic state must be dismantled if it is inconsistent with whatever substantive goals the founders sought to achieve for government structure. I find it impossible to believe that anyone at the founding would have believed that our system is consistent with their goals. (They did not express admiration for the centralized national bureaucracies of the time like France’s, or historical bureaucracies in Imperial Rome and Byzantium, as far as I know.)

Let me anticipate Will’s response, which I expect will be that originalism doesn’t necessarily preclude modern government structure. That is something to be determined. But my view is that any methodology that could even possibly entail that we must return to a government structure appropriate for a small agrarian society, a structure that exists nowhere in the world today, is off the table.

Here is a response from Michael Ramsey to my earlier post on precedent.