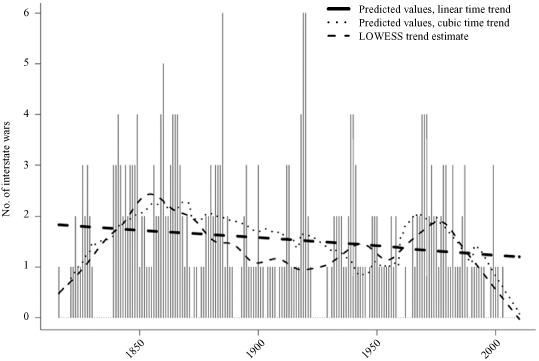 Burcu Bayram at Duck of Minerva echoes Peter Spiro’s skepticism about my skepticism:

Yet mere breach does not mean international law is epiphenomenal. The international community has condemned Russia’s action. Sanctions from the U.S. are already in effect. G7 suspended preparations for the G8 meeting in Russia. Eurozone countries seem committed to isolating Russia if a diplomatic solution cannot be found promptly even though they-especially Germany- are particularly dependent on Russia for gas and oil. All this indicates that international law is consequential.

As I explained earlier, I have never claimed that international law is inconsequential. For example, trade law seems to matter. But it is always an empirical question whether a specific rule affects state behavior or not, and in a meaningful rather than trivial way. Anecdotal evidence gets one only so far.

To address this problem, scholars use statistical methods–basically, event study methodology, to test whether state behavior changes in the predicted fashion after the state ratifies a treaty. This approach has been productively used in the area of trade (yes) and human rights (generally, no). It helps in these areas that different states ratify the treaties at different times. Unfortunately, the use of force rules came into effect all at once for everyone in 1945, so there is not enough variation to do a real test. (Many countries joined the UN system later, but usually when they came into existence, or for other unusual reasons that cannot be controlled for.)

Still, I thought it would be interesting to take a look at the incidence of interstate war, and I found the graph I reproduce above in Kristian Skrede Gleditsch & Steve Pickering, Wars Are Becoming Less Frequent (2013), which seems like a carefully written paper. The bars show the number of interstate wars (excluding civil wars) with at least 1,000 battle deaths in a given year. Note that the 2011 Libya war is excluded because the data set ends in 2010, and the 2008 Russo-Georgian war is excluded, presumably because of insufficient battle deaths.

One can certainly detect a decline in the frequency of interstate wars (as shown by the various trendlines). But it would be very hard to attribute any causal influence to the 1945 UN charter. If you trust the linear time trend, 1945 just falls in the middle of a long-term decline. If you take one of the nonlinear time trends, it falls before an increase in the number of wars. If one is looking for causes, the end of the cold war with the onset of U.S. hegemony seems like the most plausible–the infrequent warfare over the last 20 years pulls down all the time trends. However, all in all it is hard to find any causal pattern at all.

If you want to, you can find reasons for giving causal effect to  the 1945 law. You can say that it took a while for the a new norm to work itself through the system, or that the cold war or decolonization was an anomaly that interrupted what would otherwise have been a smooth pattern of causal influence. Maybe. But it seems to me that if one makes such claims, one needs to acknowledge a low level of confidence.