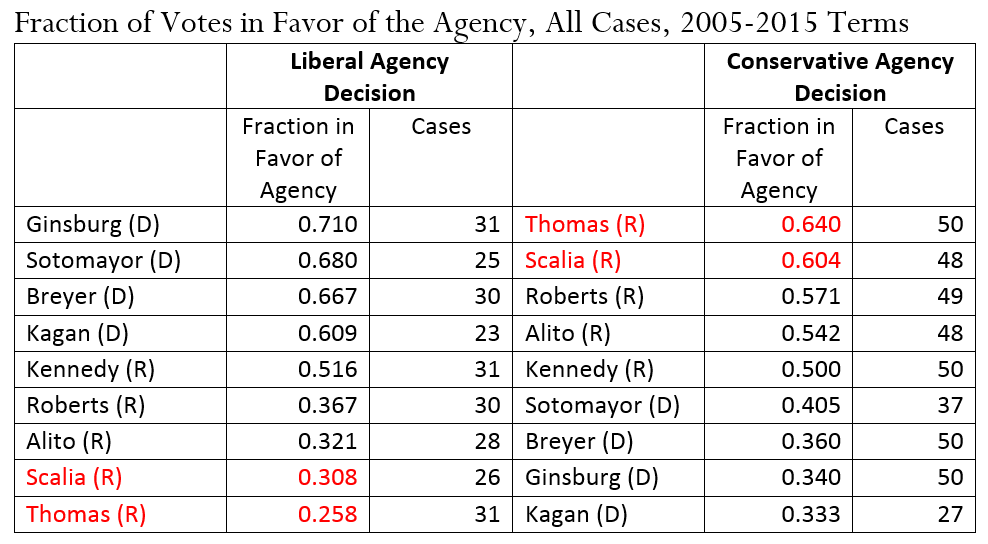 One view is that he will be a Scalia clone or near-clone. But Gorsuch has hinted, in opinions and speeches, that he believes that Chevron was wrongly decided, and that the nondelegation doctrine should be revived. He also has, on several occasions, approvingly cited Justice Thomas’ concurring opinion in Association of American Railroads, which expresses similar sentiments. Scalia defended Chevron; Thomas criticizes it. If Gorsuch turns out to replicate Thomas rather than Scalia, this could make a difference, yes? We would now have two votes on the Court, rather than one, that firmly oppose the administrative state.

No. My friend and coauthor Lee Epstein ran the numbers, which you can see above. (Note: the data are preliminary.) Whatever their doctrinal differences, Scalia and Thomas are themselves clones in administrative law cases. Colleagues tell me that while championing Chevron, Scalia evaded Chevron deference (at least, when the regulation in question advanced liberal goals) by finding statutes to be clear that others find ambiguous. A clone of Thomas is a clone of Scalia.