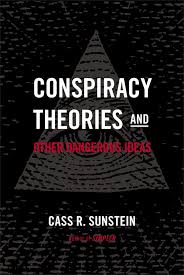 There is much of interest in this excellent new book by Cass Sunstein. The preface contains a defense of the different roles of the academic–to challenge conventional wisdom–and the public official, who must often keep his opinions to himself for the sake of operating in a team. People like Sunstein who move between academic and public roles face numerous challenges–both from the public, who see in the academic writings evidence of ideological extremity and from (naive) colleagues, who expect the advocate of (impractical) X to champion it public life even if it would bring down the ship of state. These divergent reactions are difficult to handle; few people handle it as gracefully as Sunstein has. A whole book could be written about those less graceful individuals, many of them also law professors, who traveled between law schools and various recent presidential administrations.

A few comments on Chapter 1, on conspiracy theories, which has received outsized attention:

1. Are conspiracy theories important or are they just little clumps of seaweed in the vast and bottomless ocean of public ignorance?

2. I can’t help thinking that there would be even more conspiracy theories ruining public life if people heeded calls from academics and politicians to become more involved in political debate.

3. Can “cognitive infiltration” (an unfortunate choice of words, I think, with its unnecessary sinister overtones) really work? The idea is that anonymous government agents could penetrate chat rooms and answer craziness with reason. But conspiracy theories seem to answer a deeper need than the desire for truth. N.B.: I suspect that government officials, on their own time, and not as part of formal programs, already do this, leading one to wonder how often Man-Who-Was-Thursday scenarios erupt in these chat rooms.

Like everything Sunstein writes, this book is well worth your time.