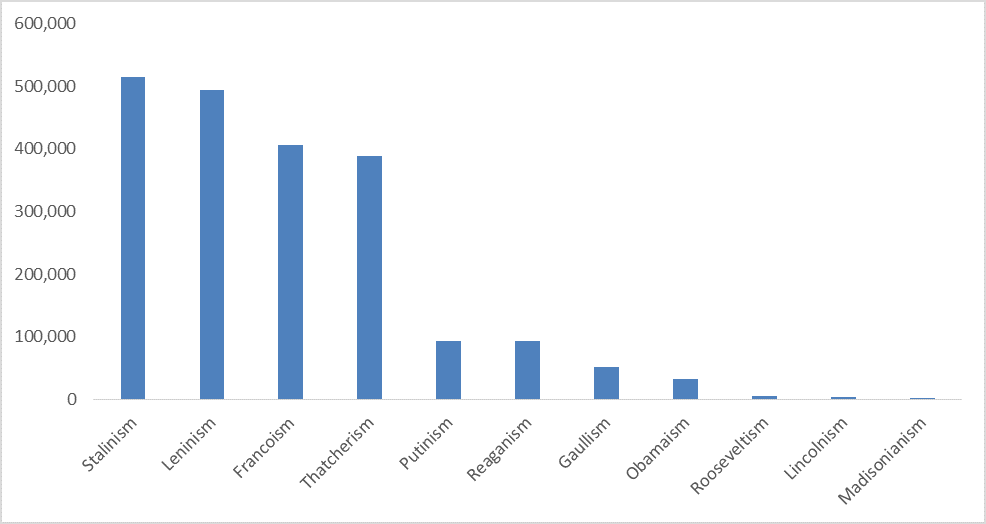 Putinism is apparently a thing. Why? And what thing is it? Putin is enormously popular among Russians because (1) they think he is responsible for the increase in their living standards when in fact they have benefited from the spike in oil prices; (2) he controls the media, which presents him as a savior; (3) he has reintroduced public order after the chaos of the transition; (4) he has appealed to national pride by making Russia a superpower again (or so they think: really a Potemkin-power); and (5) Russians don’t like democracy or liberalism but prefer the iron fist of an authoritarian ruler.

Both legitimate scholars (in the West) and ideologists, opportunists, cranks, and crackpots (in Russia) have tried to identify the distinctive features of Putinism. Laqueur, who sees a combination of luck and tactical shrewdness, is persuasively skeptical.

[N.B.: google hits on the y-axis in the figure above. “Maoism” was left off because sometimes google yielded >4 million hits and sometimes around 600,000.]