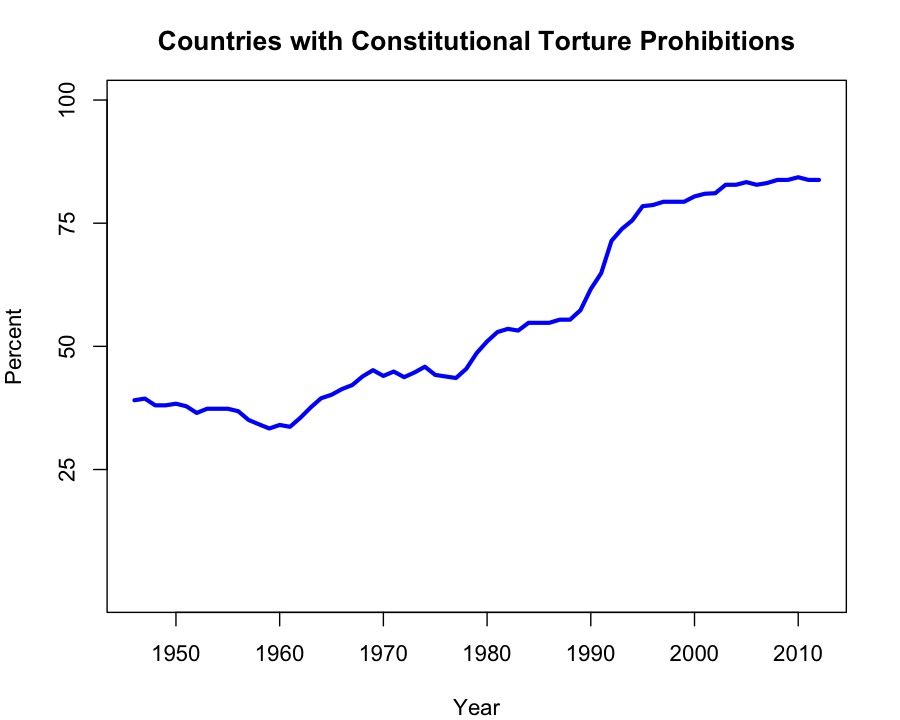 A guest post by Adam Chilton and Mila Versteeg:

As the graph above shows, about 84% of countries now have prohibitions against using torture enshrined within their constitutions. Given the recent revelations that even wealthy and democratic countries like the United States have engaged in torture, it’s worth asking whether these constitutional prohibitions have helped to actually reduce torture.

In a short article on the Washington Post’s Monkey Cage blog, we explain our recent research that finds that constitutional torture bans have not reduced torture. Although the available data on rates of torture around the world obviously isn’t perfect, a few widely used datasets have been developed. After analyzing these datasets, we’ve found that countries with torture prohibitions torture more than those without, and that rates of torture do not go down after torture prohibitions are adopted.

Although our Monkey Cage post relies on raw data to make our argument, in our academic article on the topic we use a variety of more sophisticated empirical methods. We specifically rely on a new method developed by the political scientist Yoanthan Lupu designed to address the endogeneity concern that plagues human rights research: decisions to adopt human rights protections are systematically related to human rights practices. Although Lupu uses this method to study human rights treaties, we use it to study constitutional rights. The basic idea is that we first estimate countries’ constitutional preferences using a technique known as ideal point estimation, and then match countries together based on those preferences and a range of other variables. We are then able to estimate the effect of torture prohibitions on torture rates.

When using this method, and a range of more conventional regression techniques, we do not find any evidence that constitutional torture prohibitions have reduced torture. Moreover, not only do the estimated effects of constitutional prohibitions never achieve statistical significance in the dozens of regression models we use in our paper, the estimated effects are consistently substantively small as well. Our findings thus suggest that if we want to reduce levels of torture around the world, we have to find a better way to do it than just enshrining torture prohibitions in constitutions. If you’d like to learn more about our research on the topic, our paper is available on SSRN.