The graph below shows the number of students who give themselves a 1 (“strongly disagree”) to 5 (“strongly agree”) in response to the statement “I consider myself an originalist.” We also asked them (anonymously) for their political beliefs, and there is a moderate correlation (0.48) between being an originalist and being conservative. 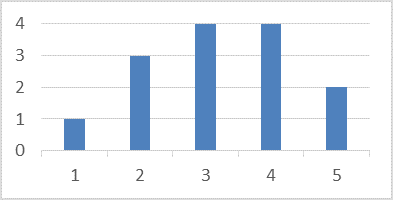 Let’s see whether students change their mind by the end of the course. Meanwhile, a few comments on Heller. It seems to me that the text of the Second Amendment suggests that the right to bear arms is tied to serving in a militia, though not unambiguously, and that the exhaustive historical research discussed by the Court does not resolve the ambiguity one way or the other. A general preference for allowing voters to make up their own mind, the absence of any allegation or evidence of political failure, a relevant precedent if not a strong one, and a very long history of gun control legislation across the country all point to upholding the statute. Both Scalia’s and Stevens’ opinions are horrible messes. Scalia’s parsing of the text is wooden and ludicrous. Both of them select the evidence they like and interpret it tendentiously. Neither show any feeling for history. The opinions are tedious, pompous anti-models of judicial writing, no advertisement for the method of originalism.