I’ve read a lot of claims about Scalia’s influence over the development of the law. His fans insist that even if Scalia’s position did not always (or even usually) prevail in the major cases heard by the Court, his theories of constitutional and statutory interpretation have forced other justices and lower-court judges to write analytically tighter opinions. For reasons I’ve given elsewhere, I’m skeptical. But these things are heard to measure. Is there something measurable we can look at?

According to Jeffrey Toobin,

During Scalia’s first two decades as a Justice, Chief Justice William H. Rehnquist rarely gave him important constitutional cases to write for the Court; the Chief feared that Scalia’s extreme views would repel Sandra Day O’Connor, the Court’s swing vote, who had a toxic relationship with him during their early days as colleagues.

If true, this seems like a damning indictment. A justice who, in insisting on the purity of his principles or perhaps in indulging in the charms of invective, gives up the opportunity to shape the law does more harm than good for his followers. To see if Toobin’s claim is true, I collected a list of “landmark cases” from Wikipedia (where else?), and asked an RA to count up the number of majority opinions written by each justice starting with Scalia’s first term in 1986, and excluding the justices who left the bench in the early 1990s. Normal empirical-research caveats apply. Here are the results: 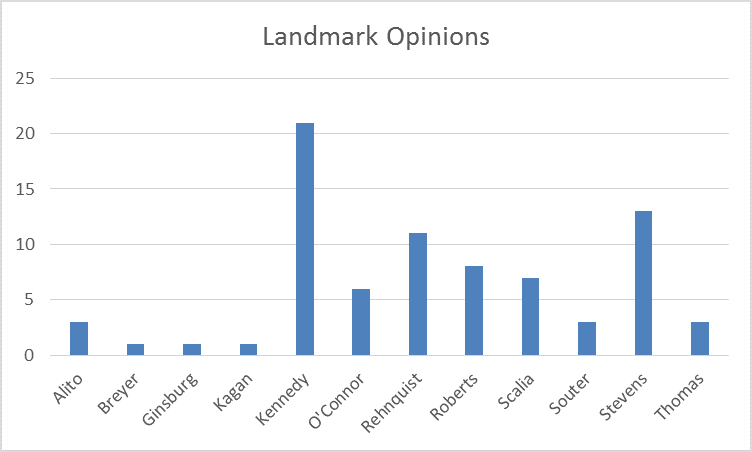 Scalia doesn’t look too bad. No surprise that the two chief justices would reserve many of the most important cases for themselves, and that Kennedy and Stevens—perennial swing-voters—would devour the lion’s share of the others. Still, in a right-leaning court Scalia hardly distinguishes himself.

Scalia has also been on the bench a lot longer than the others. Adjusting for years on the bench, one gets a more accurate view of his capacity to influence the law. 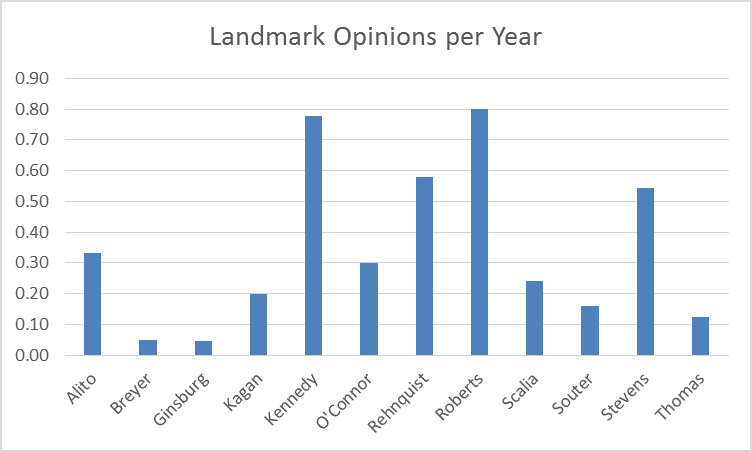 Scalia does worse than Alito, his junior by many years, and barely surpasses Kagan, another junior who is hampered by her position on the left. Will Scalia go down in history as a justice whose ability to influence the law fell somewhere between that of Souter and O’Connor?