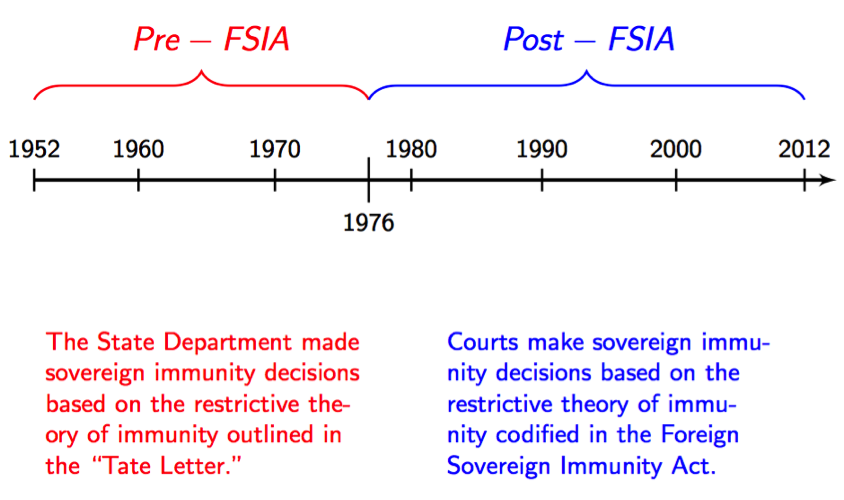 A Guest Post by Adam Chilton and Christopher Whytock:

Discretion to make political or legal decisions is frequently given to one branch of government based on the belief that it is better suited to make a particular kind of decision than another branch. For example, much of administrative law is premised on the idea that administrative agencies are better positioned to make decisions about how to carry out their missions than judges. When these claims of comparative institutional competence are made, however, they are rarely based on systematic empirical evidence. This is in part because there are rarely opportunities to evaluate what happens when two different branches of government are tasked with making the kind of decision.

In a paper published last week, Foreign Sovereign Immunity and Comparative Institutional Competence, we empirically evaluate one comparative institutional competence claim by taking advantage of a situation where Congress moved the authority to make a certain kind of decision from the State Department to the courts. That situation was created by the passage of the Foreign Sovereign Immunities Act (FSIA) of 1976.

There is a longstanding principle of customary international law that governments should not be subject to suit in the courts of a foreign country. In 1952, however, the United States adopted a new, restrictive theory of when sovereign immunity should be granted. This paved the way for foreign governments to be sued in American courts over their “commercial activities” (like breaking a contract with an airplane manufacture) but not their “public acts” (like passing legislation that limits what kinds of airplanes are allowed to fly in their airspace).

Of course, whether any particular action taken by a foreign government constitutes a commercial activity or a public action is not always clear. When suits against foreign governments arose, initially it was the State Department that was forced to make these calls. It was not long though before critics began to argue that the State Department was making politically motivated decisions—for example, that immunity was awarded to important countries even though a specific suit was clearly based on commercial activities that should prevent immunity from being granted. In 1976, Congress responded to these criticisms by moving the authority to make foreign sovereign immunity decision from the State Departments to the courts.

To leverage this change in authority, we built a database of immunity decisions made before and after the passage of the FSIA. By controlling for the facts underlying each dispute and the characteristics of the parties involved, we are able gain some traction on how these two different branches of government have made foreign relations decisions. In contrast to previous studies that evaluated a small number of cases qualitatively, our study does not reveal evidence of systematic bias in the State Department’s immunity decisionmaking, while it does identify potential political influences on the courts’ decisionmaking. Although there are admittedly some limitations to our data and approach, these results still challenge the frequently made argument that the State Department is worse at making legal determinations free from political interference than other branches of government. If you want to read more about our method and results, you can find the paper at SSRN.