A meditation on our political culture.

I argue for such a statute here.

In The New Republic, Noam Scheiber advocates price regulation and subsidization of legal services, so as to counter the advantages that the rich enjoy in our legal system. I criticize his argument here. My argument begins:

In days of old, litigants would hire champions to assert their claims in trial by battle. The rich could afford more skilled warriors, and so were more likely to win their lawsuits (and less likely to lose their heads). One could imagine proto-liberals at the time proposing, quite sensibly, that everyone receive a champion of equal quality. Whether this would have improved justice is another matter. 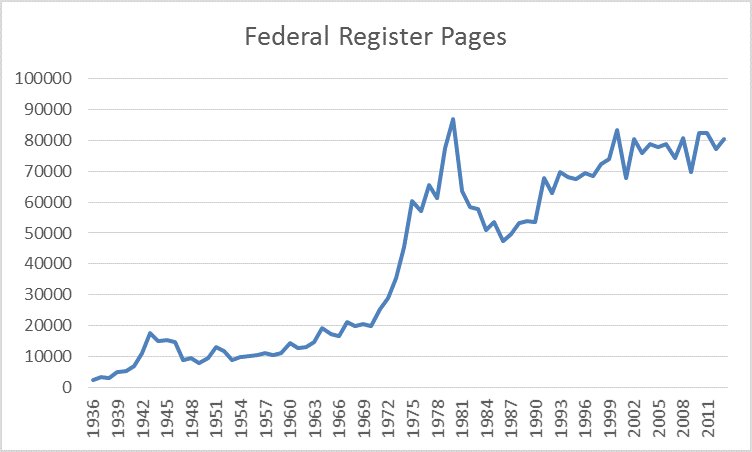 As Andrew Rudalevige notes, in response to fellow Monkey Cage inmate, Erik Voeten, presidents do not exercise power only through executive orders. Moreover, many executive orders are trivial while others are important, so one can learn only so much from their absolute numbers. For that reason, it is important to look at other measures of executive power. The graph above shows the number of pages in the Federal Register each year to provide a rough sense of regulatory activity of the executive branch. For many reasons, this measure is extremely crude, but it reinforces two important points: that executive power has increased dramatically since World War II, and that in recent years any particular president such as Obama or Bush does not act much differently from his predecessors.

As I note in a comment on NYT’s Room for Debate, the “executive order” imbroglio coming out of the State of the Union speech is strange. The White House told newspapers before the speech that the president planned to sling about executive orders like Zeus with his thunderbolts, and they duly reported it on their front pages. Republicans duly exploded with outrage. The speech itself has a single mention of executive orders (“I will issue an executive order requiring federal contractors to pay their federally-funded employees a fair wage of at least $10.10 an hour”). The president continues in this vein, saying that he is going to do a bunch of other extremely minor things using his existing statutory authority, though it would be better if Congress would chip in with some legislation. The resulting controversy about presidential power is entirely manufactured–by both sides. Maybe the president’s strategy was to look fierce to his supporters while not actually doing anything that might get him in trouble with Congress. 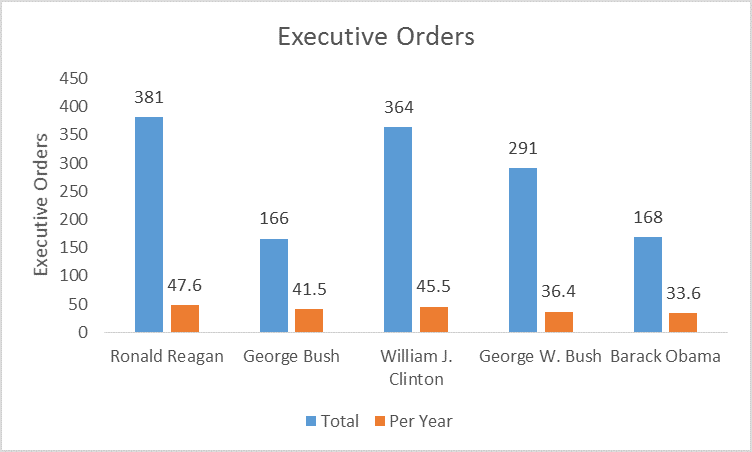 Here is Charles Barzun, who gets the final word. The original paper is here; Charles’ response; my reply; Adrian’s reply.

In my response to their thought-provoking paper, I argued that the supposed fallacy that Eric and Adrian identify depends on empirical claims about judicial behavior in a way that they denied.  My point was that although the targets of their critique may make different assumptions about what motivates judges and what motivates political actors in the other branches, those assumptions are not necessarily “inconsistent” if the different treatment is justified by the different institutional norms and constraints that operate on judges, as compared to other political actors (which I consider to be at least in part an empirical question).  Neither this point – nor any other one I made – depends on controversial claims about the nature of truth or logical consistency, postmodern or otherwise.

In their brief rejoinders, Eric and Adrian continue to insist that their argument does not depend on any empirical claims about what motivates judges.  But in so arguing, each of them contradicts himself and concedes my original point in the process.

Adrian first says of the kind of argument they were examining that “it is caught in a dilemma — it can survive filter (1) only by taking a form that causes it to be weeded out by filter (2).”  I take Adrian to mean here that the argument can avoid the charge of inconsistency (filter (1)) but only at the cost of making implausible empirical assumptions about how judges act (filter (2)).  But then he goes on to say that by the time we are considering the empirical question (filter (2)), “the fallacy has already dropped out by that point; it is not affected at all by whatever happens in the debate at the second stage.”  But how can it be that the fallacy is “not affected” by what happens at the second stage if, as he has just said, it can “survive filter (1)” by making empirical claims that filter (2) then “weeds out”?

Eric makes the same error in even more efficient fashion.  He says, “we sometimes argue that they escape the problem only by making implausible arguments.  But the inside-outside problem does not depend on our skepticism about these specific arguments being correct.”  Eric’s second sentence contradicts his first.  He acknowledges that the targets of their critique can “escape the problem” (of inconsistency) by making what he considers to be implausible empirical arguments.  But then he insists that their charge of inconsistency does not depend on those empirical arguments about judicial behavior being implausible.  But how can that be the case if, as he has just said, the scholars can avoid inconsistency if those empirical arguments are correct?

I don’t think I’m the postmodernist in this debate.

I generally follow Johnson’s advice never to respond to critics, but this is the season for breaking resolutions. So let me offer a brief rejoinder to Charles Barzun’s response to the Posner/Vermeule paper on the Inside/Outside Fallacy; both are recently published by the University of Chicago Law Review.

Eric and I suppose that successful arguments (in constitutional theory, inter alia) must pass through two separate, independent and cumulative filters: (1) a requirement of logical consistency (the inside/outside fallacy is one way of violating this requirement); (2) a requirement of substantive plausibility (not ultimate correctness).

With respect to some of the particular arguments we discuss in the paper, we say that the argument is caught in a dilemma — it can survive filter (1) only by taking a form that causes it to be weeded out by filter (2). Now in some of those cases, I take it, Charles disagrees with us that the argument fails the second filter. He is of course entitled to his views about that. But the inside/outside fallacy — which is the first filter — is strictly about the logical consistency of assumptions, not their plausibility. Thus the fallacy has already dropped out by that point; it is not affected at all by whatever happens in the debate at the second stage. It’s just a muddle to say that because Eric and I do happen to have substantive views about what counts as plausible for purposes of the second filter, we are therefore smuggling substantive content into the first filter. Not so — unless one subscribes to the postmodern view that logical consistency is itself a substantive requirement, thereby jettisoning the distinction between validity and truth. (In some passages, Charles seems willing to abandon himself utterly to that hideous error, but for charity’s sake we ought not read him so, if we can help it).

So when Charles says that the inside/outside fallacy smuggles in substantive assumptions, I think that’s a confusion that arises from failing to understand the distinction between the two filters. The reader of Charles’s piece should be alert for skipping to and fro between these distinct questions of logical consistency and plausibility.

I examine the grudging case at Slate. 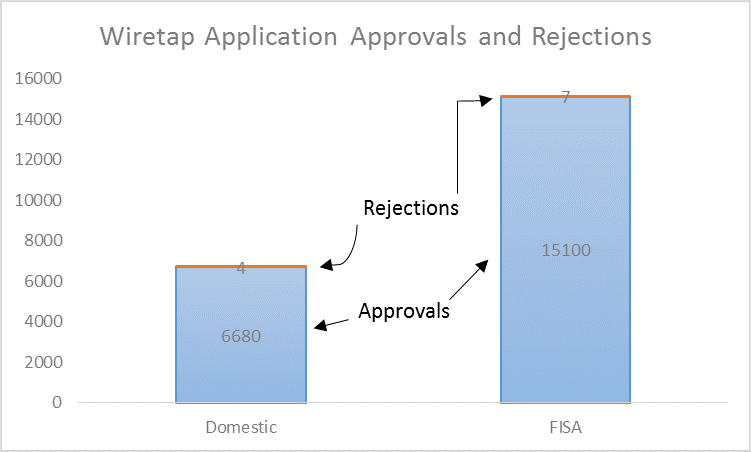 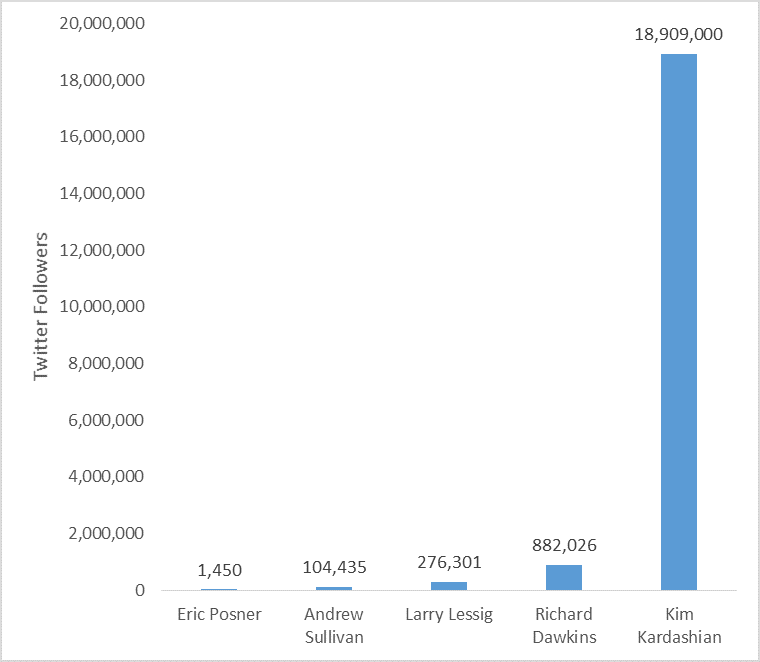 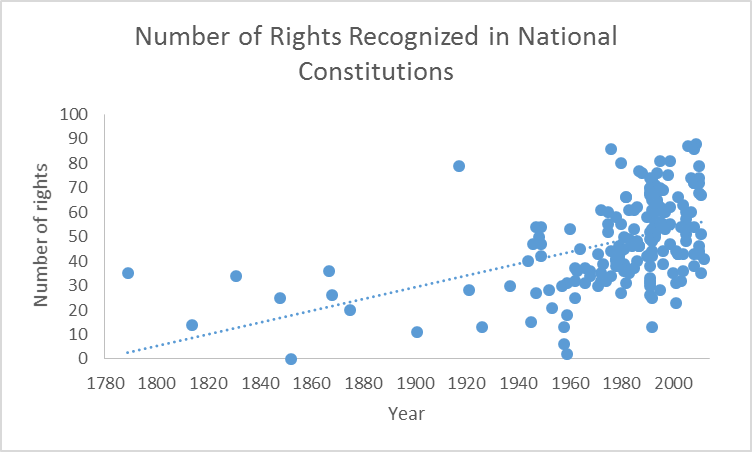 The data source is the new Comparative Constitutions Project website. Compare to the growth of international human rights:

The graph shows increases in the number of human rights as recognized by the various human rights treaties when they went into force.

This is the title of a new book edited by Cary Coglianese, Adam M. Finkel , and Christopher Carrigan. The book contains a chapter by me and Jonathan Masur, which builds on, and responds to criticisms of, our earlier article, Regulation, Unemployment, and Cost-Benefit Analysis. In the chapter and article, we argue that when agencies conduct cost-benefit analysis, they should take into account the effects of regulations on job loss.

The book has a broader scope. It focuses also on the larger question on whether regulation kills jobs. The answer, unavoidably, is sometimes. Our view is that even when it does, regulations are justified when the benefits are large enough, and agencies need to make sure this is the case by conducting cost-benefit analysis properly.

The standard model of judicial behavior suggests that judges primarily care about deciding cases in ways that further their political ideologies. But judicial behavior seems much more complex. Politicians who nominate people for judgeships do not typically tout their ideology (except sometimes using vague code words), but they always claim that the nominees will be competent judges. Moreover, it stands to reason that voters would support politicians who appoint competent as well as ideologically compatible judges. We test this hypothesis using a dataset consisting of promotions to the federal circuit courts. We find, using a set of objective measures of judicial performance, that competence seems to matter in promotions in that the least competent judges do not get elevated. But the judges who score the highest on our competence measures also do not get elevated. So, while there is no loser’s reward, there may be something of a winner’s curse, where those with the highest levels of competence hurt their chances of elevation.